What is the LDF?

The Labour Diversity Fund is a proposed fund within the Labour Party to develop talented individuals from under-represented groups (such as non-white, female and disabled candidates), and provide grants to people unable to sustain the costs of candidacy for Westminster parliamentary elections.

Why is it needed?

The representation of ethnic minorities and women in the House of Commons has been considered by the Speaker’s Conference on Parliamentary Representation over the past year. One of the unexpected findings was that the cost of candidacy often deters people from under-represented groups from standing for election.

These economic stresses are reflected in the make-up of the current parliament and PLP. The Smith Institute found that:

“Parliament is becoming less representative in terms of education and occupation, and continues to attract similar types of people from a rather narrow professional base”
The Smith Institute, Who Governs Britain: A Profile of MPs in the new Parliament

In a modern democracy, such barriers to political office are every bit as unacceptable as the chronic underrepresentation it creates for certain groups.

How does it work?

Money from the LDF would go: 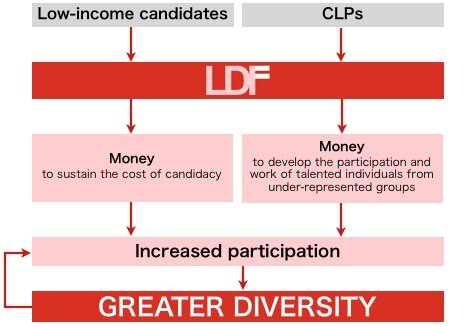 A more diverse Party will, over time, break down the stereotype of what a typical MP ‘should be’. This will encourage increased participation from all sections of our society.

How much does it cost to stand?

Initially there are costs relating to the task of being selected by a local constituency to stand as their official candidate (prospective parliamentary candidate, or PPC). This often involves frequent trips to far-off constituencies.
Once selected, there are the further costs of campaigning at a by-election or general election for the support of the wider electorate. These are costs which are recognised by the parties, and outside bodies such as the Electoral Commission, as necessary in the electoral process.
In addition, for most candidates there will be the cost of sustaining and building a candidacy between selection and the formal start of the election campaign. This period can last several years, and the costs to the candidate – both in financial and personal terms – can be considerable.
In the anecdotal evidence given to the Speaker’s Conference on Parliamentary Representation, reports were common of candidates accruing significant debts, and being forced to give up their candidacy because they simply could not afford to go on.

Where would the money come from?

The fund will be an allocation of the Labour Party’s centrally-held financial resources. Those resources are accrued by things like donations to the party and membership fees. Labour Party donations (excluding public funds) between 1 January and 31 March 2010 amounted to £4,072,432. Just a 1% allowance would raise £40,000 for the LDF; 5% would raise £200,000.

Would Labour benefit from the LDF?

Yes. A more diverse Labour Party would be richer in character, fairer in principle and stronger in practice. LDF would also stand to help the Party electorally. Over time the fall in the amount of Labour votes has matched declining representation of those from manual working backgrounds in the Parliamentary Labour Party. Labour’s share of the lower income D E socio-economic groups at the last election were down by a third to 40% according to recent analysis.

What criteria would be used?

Applicants would need to fulfil Labour Party criteria, support the programme and values of the Party. On their application form, candidates would be required to disclose their full finances, which would be kept in confidence and in adherence to the applicant’s rights under the Data Protection Act. The onus would be towards an honest disclosure by the applicant with the consequence of possible suspension if found to be false at a later date.

The Labour Diversity Fund is a proposed fund within the Labour Party to develop talented individuals from under-represented groups, and provide grants to people unable to sustain the costs of candidacy.   Get the lowdown »

Error: Twitter did not respond. Please wait a few minutes and refresh this page.